On a lazy evening, Shaer called me up and asked, “are you going to attend tomorrow’s conference?” Momentarily I recapped my schedules and replied –‘no I don’t have any plan “. With disappointment he said, “such an important program is going on but you are not even curious to visit once”. Well, I gave it a thought, gave in, not so enthusiastic, though. I never regretted. And this is why didn’t.

Next day, I canceled some of my preplanned schedules and went there. I was waiting for my colleague, Chayan and all of a sudden found some known faces around me. After spending little time with them we entered into the seminar hall. I glimpsed approximately 8-10 foreign faces along with some local experts on the stage.

The seminar started exactly at 4 PM, but I was barely interested to lend my ear. After a while, I noticed that some interesting statistics were being shown by presenters on how Bangladesh would earn a billion-dollar through IT outsourcing. Suddenly it struck my mind, and I gave full attention to perceive how it’s possible. The speakers demonstrated every strength and weakness we currently have to reach to the destination. Low cost, quality coding, government support are some of our strengths. On the other hand, English speaking skill, limited international payment support were showed as our weaknesses. 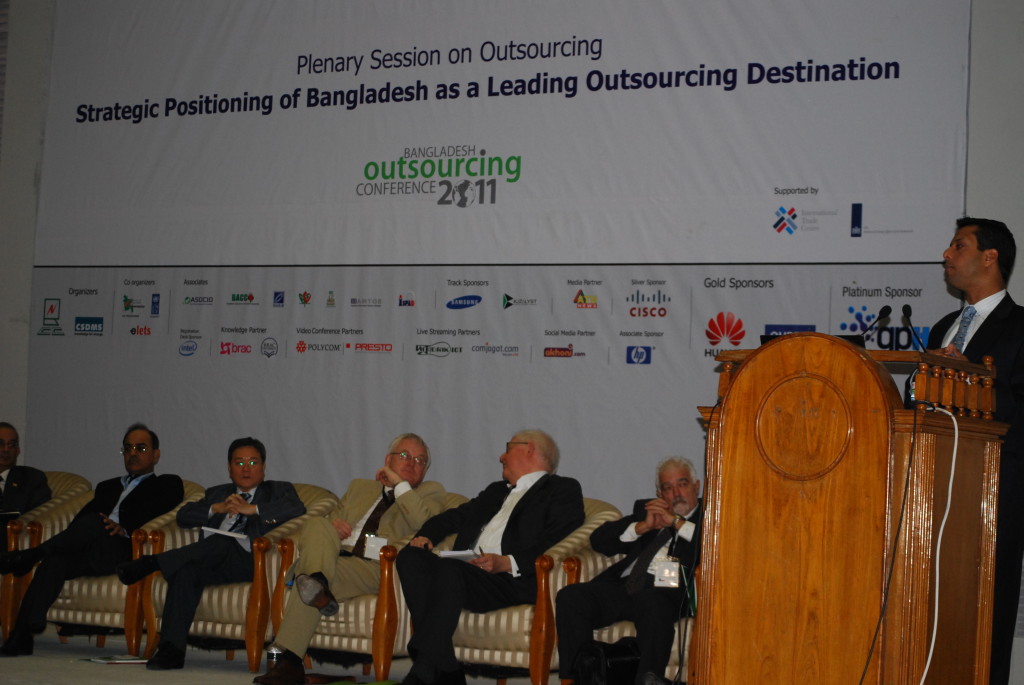 Currently, about 10,000 freelance software developers in the country are earning roughly $40 million annually.  The growth rate of the industry has been around 40% for the last few years. Freelancers and outsourcing companies demanded to take the necessary steps to introduce a convenient online money transfer service, such as PayPal, for smooth transfer of their payment. Consequently, State Minister explained the progress to introduce PayPal service.

Some of the seminars that took my attention are followings.

Have you ever imagined that Bangladesh ICT industry is capable to earn billions of dollar?  Had I not attended the seminars, I wouldn’t have the idea either. If everything follows the trend, this industry is going to be as big as the RMG industry in a decade. What do you think?

[…] year it happened in Dhaka, at BICC. Three days of  conferences, exhibitions and an award ceremony. Around 150 exhibitors displayed a wide range of services, such […]

It’s a pleasure to find such ranottaliiy in an answer. Welcome to the debate.