Better Collective: It’s fun to grow with a growing team!

When they eliminated some non-performing companies, we got a chance to apply and to finally get selected! The project NTFII (Netherland Trust Fund II) is a program organized by International Trade Centre (ITC) for three years. We got chance in the third year in February 2012.

NTFII organized matchmaking events during the Basis SoftExpo 2012,  where a number of Bangladeshi software companies and European Companies got chance to meet each other.

We met about four of them. Some of them were interested in designing or in technologies those we were not very comfortable with. The meetings were not apparently very fruitful for us. We were sitting there with disappointment! During that time, we found someone with an empty chair in front. We had eye contacts, proposed for a meeting. That was Jesper Søgaard, CEO & co-founder of Chrisper Economy. That started one of the most successful business partnerships for Nascenia.

Jesper was looking for expertise in ModX, a CMS platform for PHP for his company. We were not very familiar with that platform but were willing to try. Among many other things, we had a conversation about our companies, about Bangladesh and about Champions Leagues! Next day he visited our office, we helped him goin tog other companies he was scheduled to visit. A trustworthy relationship was brewing.

Shaer and Fuad visited Denmark during the end of that year; Better Collective hosted them in Copenhagen. They went to see a Champions League match between Chelsea and FC Nordsjælland after dinner. It was fun and friendly. Couple of months later the BC team in Nascenia grew by two more team members. 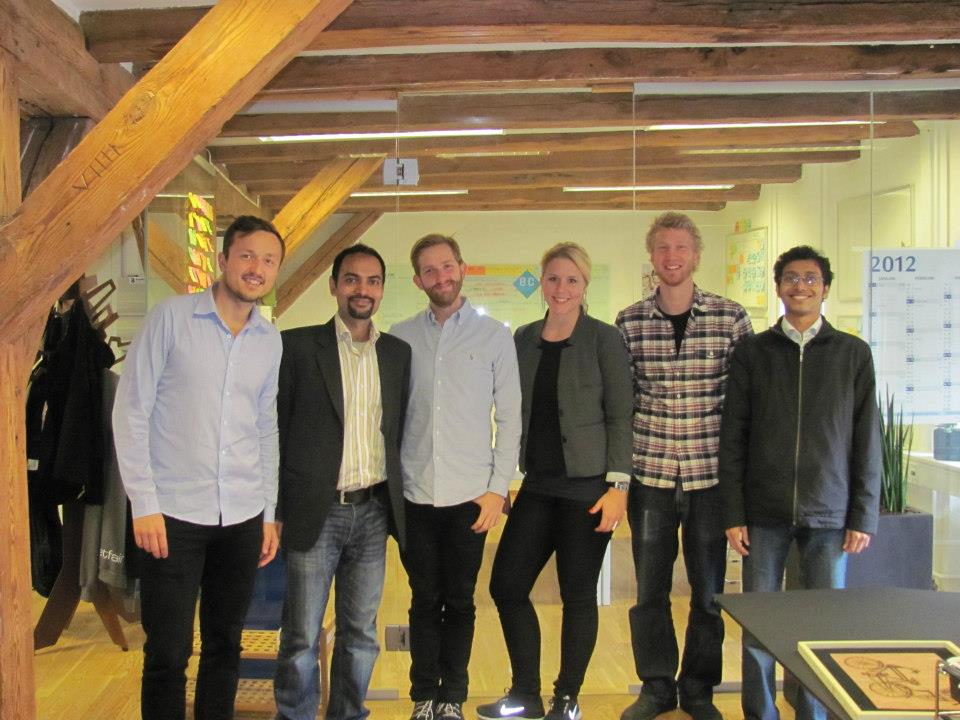 In Copenhagen at the office of Better Collective

During February 2013, Thomas Høgenhaven (Chief Strategy Officer), Camilla Wissing Bille (Chief Operating Officer), Janis Daniel Pascal Ewald (Head of Outsourcing) visited us in Bangladesh. We took them into Sundarban, the largest mangrove forest on earth. It was fun and adventurous! 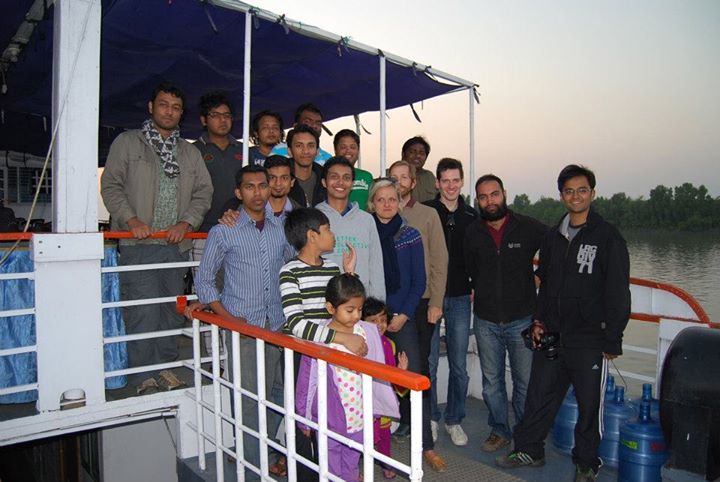 Nascenia and Better Collective Team had a great time in Sundarban, Bangladesh

Take a closer look to Forest and its visitors from our Facebook photo album.

They brought for us BC hoodies and stickers. 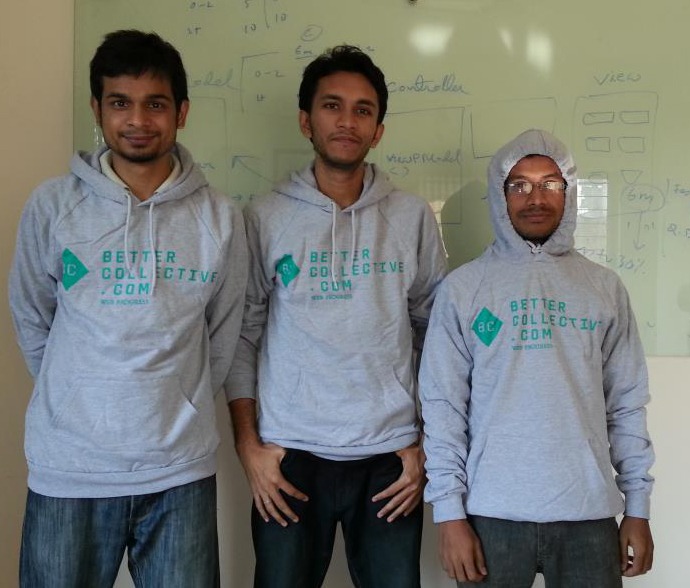 We presented them with mementos. 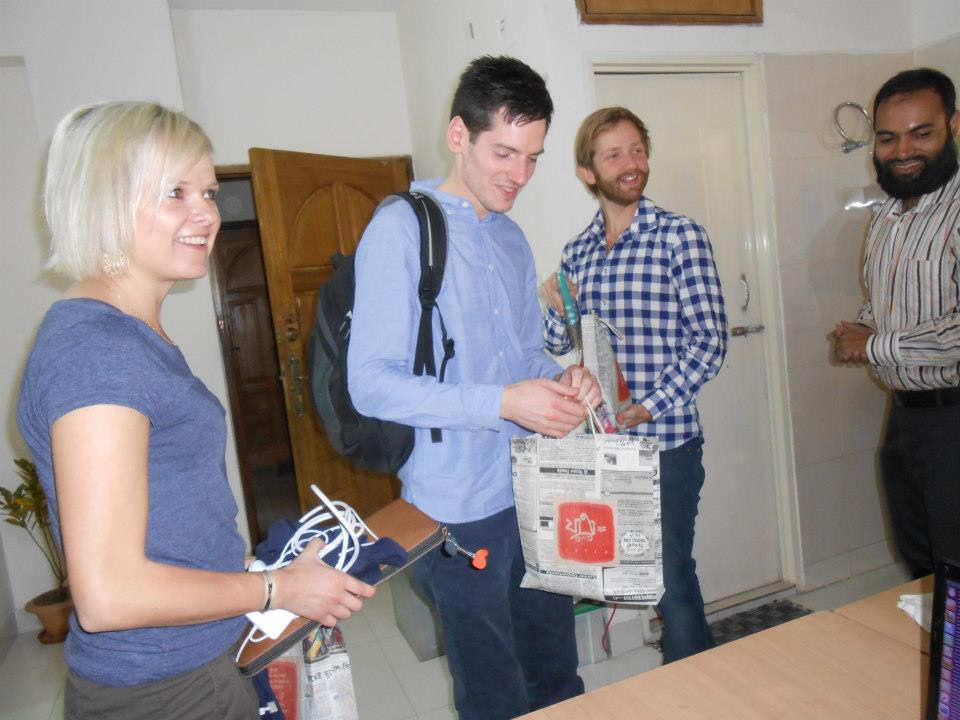 Nascenia presenting BC visitors in Bangladesh

They were searching for good designers. Unfortunately, we were not good enough in web design at that time. So we took them out and introduced two good designing companies for helping them. During the whole tour, we got to know each other’s operations very well and built a strong relationship.

When Shaer and Fuad went to London, Jesper, Janis, and Camilla flew over there to meet with them. They discussed the improvement, opportunities and future plans.

Now, eight of us are working for the web technology and one is working on building mobile applications for Better Collective. What we can say is, they have some exciting products in their pipeline which will be revealed soon!

Some Projects done for Better Collective

We converted their websites to ModX. We worked on performance improvements and profiling for different sites. We made most of their sites responsive. We moved their websites to the cloud. Later, we started to work on their core projects such as BettingExpert, TandemPartners and some unreleased products.

Nascenia and Better Collective team are now committed and emotionally attached too. We feel like colleagues although we do our offices a thousand miles apart. We are always in touch with email and project management tool. Every week, we see each other at least twice through Google hangout. We paired two developers from two teams to work as code buddy.

The Nascenia-BC partnership became so successful that ITC mentioned it on their site. 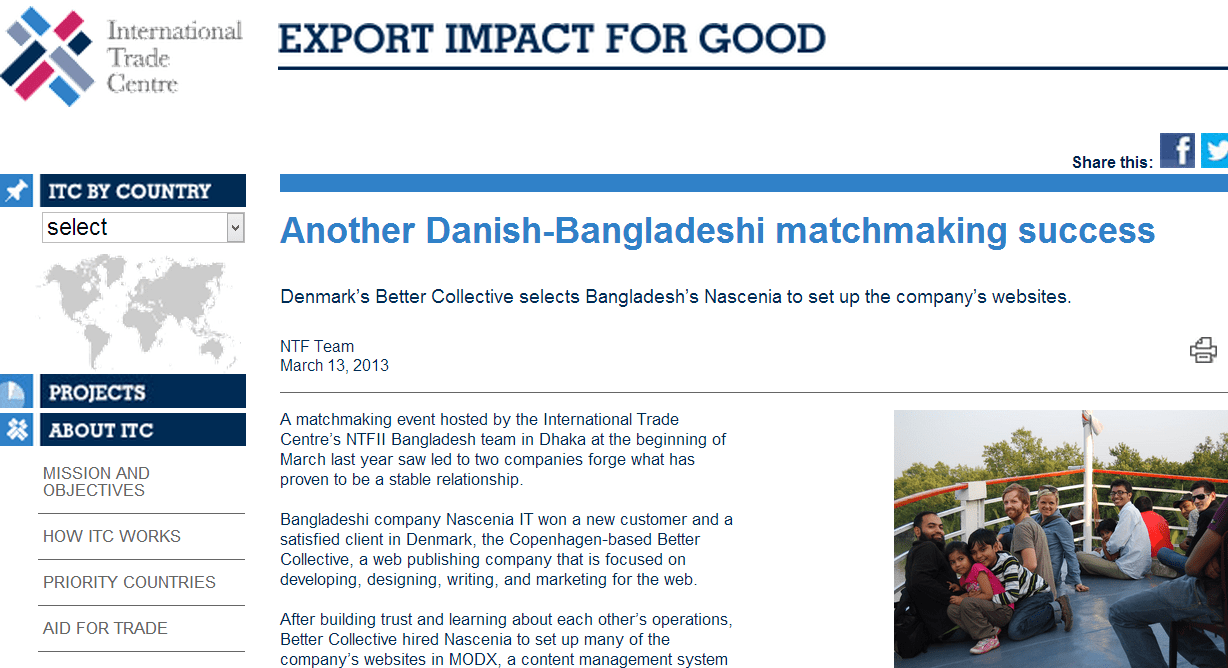 Nascenia selected by Better Collective to set up their websites

Thomas, Janis and Henrik (Head of Tech of Better Collective) are scheduled to visit the BC team at Nascenia in Bangladesh in a couple of months. We are really excited and looking forward to meet with them in Bangladesh!

Update (June 2018): We are delighted to let you know that, Better Collective has gone into IPO and started their journey in Nasdaq Stockholm. You will find them from here.