The recent surge in the price of bitcoin has made the general people interested in the cryptocurrency and how it functions. So let us go to the roots of the mystery that has the potential to become a revolution in technology. What bitcoin actually uses is a technology devised for itself, called blockchain technology. It was conceptualized by the creator or the creators of bitcoin, Satoshi Nakamoto, in 2008.

A blockchain, which was originally called blockchain, is a continuously growing list of records. The records are called blocks and they are linked and secured using cryptography. It allows the information to be distributed but does not allow one to copy it. Thus it creates a highly secured and decentralized system where anyone with an access to the internet can view it. The information is duplicated thousands of time over a network of computers and is continuously reconciled.

When any new information is added, it is added as a block to the already existing chain. The data can be easily accessible to anyone on the internet, thus making it truly public and easily verifiable. As the blockchain database is not stored at a single location and hosted by millions of computers simultaneously, no centralized version for this is available for the hackers to attack.

There are two kinds of records in a blockchain database. One is for transactions and the other is for blocks. Blocks hold batches of valid transactions which are hashed and encoded into a Merkle tree. The hash of the prior block is included in each new block so that there is a link between them in the blockchain. The repetitive process finds out the source information all the way to the original genesis block. The process can create a block in a minimum time of five seconds.

Sometimes separate blocks can be produced simultaneously, which will create a temporary fork. But the blockchain has a specified algorithm for navigating history that has a higher value than the others. That helps the peers supporting the database to keep only the highest scoring version of the database to them by overwriting the old ones and transmitting the newer version to their peers. Blockchain security uses encryption technology like the traditional ‘public-private’ key system. The ‘public’ key gives users access to blockchain whereas the ‘private’ key acts as a password for the access to bitcoins and other digital assets. 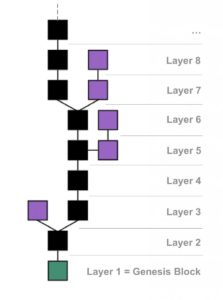 Blockchain Technology in bitcoin and Its Durability

Since its inception in 2009, bitcoin has not experienced any major disruption in its operation. Whatever disruption has been caused are due to human error or malicious intent, not for any flaw in the concept of the technology. The internet itself has been proved durable over time. So it is definitely a good sign for the blockchain technology as it continues to evolve.

In bitcoin blockchain is used as a public ledger for all the transactions over the network. By using blockchain, bitcoin became the first digital currency to solve the double spending problem. Double spending means spending the same digital token twice by forging the data in a digital file. As the transaction of bitcoin is recorded in the blockchain, it is impossible to duplicate it; thus enabling it to run without any trusted authority or a central server.

The Bitcoin database expanded exponentially from the year 2015 to 2017. It increased from 17 GB to 100GB within the last two years. Currently, the market cap of bitcoin is roughly $370 billion and it is still growing.

The insurance industry is operating peer-to-peer insurance, parametric insurance, and microinsurance by adopting blockchain. Banks are trying to implement the technology as this can potentially speed up the whole banking process. The sharing economy and IoT are also set to benefit from blockchains because they involve many collaborating peers. Online voting is another great example of the application of the blockchain.

Blockchains are being used in developing information systems for medical records and are being developed for data storage, publishing texts and identifying the origin of digital art.
In near future, following things can be implemented through blockchain technology:

Really helpful article. Not so long but clear concept. Last two months I was googling about this blockchain technology and I’m so impressed that I want to do my final year thesis on this.