Biyeta : A trustworthy matrimony site to find your life partner 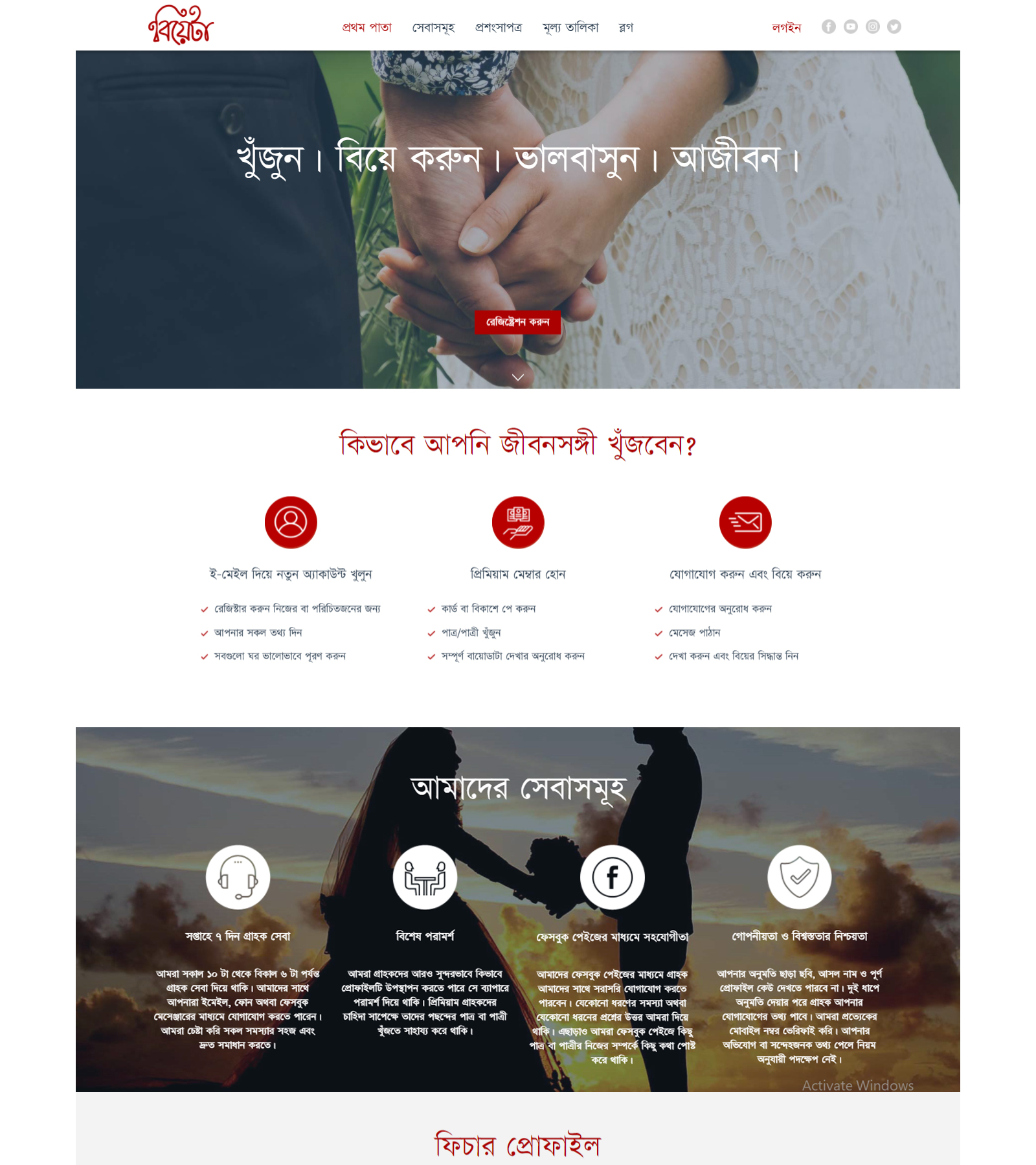 Marriage is magical – it is slipping briskly into an intimacy from which they never recover. In South Asian subcontinent, traditional marriage is a ceremonial ritual which takes place by pre-arrangement between families. It is a common practice that the parents or family chooses the bride/groom with the consent of the potential marriage candidate.

From ages, the proper bride/groom was searched through “ghotok”, if not by the neighbors or relatives. The “ghotok”  was a professional matchmaker, who had information about a lot of potential marriage candidates and s/he used to go from house to house and showed proper shortlisted candidates to the parents. However, the situation has changed in many places. For instance, in Bangladesh, social structures have changed drastically due to urbanization. Nowadays, lives have become very fast and people have become more self/family-centric. There has been a lack of communication among the people of society, which has created a social distance. Moreover, the professional ghotoks (matchmakers) are almost extinct due to urbanization and lack of trust.

Shaer Hassan, the CEO of Nascenia, took an initiative to mitigate these issues with the help of technology. There came the idea of Biyeta.com. It’s not like, there was no prevailing dating or matrimonial platforms during that time. However, the dating sites were not going to serve the purpose because those tend to focus on rather casual relationships and do not provide much information about the users. On the other hand, some issues were found regarding the existing matrimonial platforms according to a survey conducted by Nascenia.

According to the survey:

To recap, the professional matchmakers are a rarity, the objectives of dating sites were different, the existing matchmaking platforms are outdated, not trustworthy and unable to respect the privacy, what options were the families left with?

As they do not have access to that many potential marriage candidates at a particular time, they ask for help from friends, relatives, and neighbors to refer to good candidates. In most of the cases, their requests go in vain because nobody wants to take responsibilities (of a failed marriage, perhaps?). What if the referred candidate turns out to be a ‘serial killer’ later! Ha ha ha, it was just a fun, but, many of you might have understood what we meant!

Keeping these issues in mind, we attempted to serve the social need and to lessen the hassle of the families to find the right person as a life partner. Nascenia took the arduous task to build it overcoming all the prevailing challenges and issues those were found through the survey. Biyeta website was launched back in 2015 in Bangladesh with a view to searching the right life partner hassle-free.

When Shaer came to the technical team of Nascenia, we spoke with him multiple times to understand the pain points he identified in this arena. Then, we prepared wireframes using Balsamiq. We also prepared a flow before implementing the software. Shaer took these to the people asking for reviews. The wireframe was modified multiple times. Then the workflow was prepared which was an iterative process to finally result in the most desirable output.

Based on this platform uses Ruby on Rails (Rails Version: rails-4.1.11) and Ruby Version:2.2.10, initially which was 2.1.5), Mysql, Devise, CarrierWave etc. For server requirement,  Ubuntu 12.04.5 LTS, Nginx/1.6.2, Passenger-4.0.56 etc have been used. On top of those, a quite complex matching algorithm is used which shortlists and suggest candidates based on mutual preferences using 20×2 attributed provided by the users. This matching algorithm is special because the suggested shortlist of candidates are sort out based on both parties preferences rather using any one’s.

The users fear lack of privacy to provide their information to anyone beforehand. This problem is solved using a similar strategy of the traditional system into this technological platform. Biyeta ensures that not all information provided by a certain user is available to the other users firsthand. Rather, only some basic information is revealed at first, like – education level, religion, skin color etc. You can choose whether to show or hide your image at the primary level. Seeing this basic information, someone can send you a contact request. If you accept the request, s/he can proceed further to see more about you. At the same time, you can see his/her full profile when s/he sends you request. Checking his/her profile, you can either accept/deny the request. Alternatively, you can just do no response at all. On the contrary, if you like his/her profile very much you can directly invite him/her to contact you instead of just accepting his/her request.

Some reasons why Biyeta exceeds the conventional process are:

Although, logical thinking should lead to using Biyeta to make the right choice. However, in Bangladesh, there prevails a social stigma which indicates that the people who marry through technological platforms might have some issues or are less desirable. This mentality stops many people from using this type of platform. Therefore, people should think more logically and consider using technology for their best. This video (in the Bengali Language) shows the feelings of one of the couples who have met through Biyeta and are living happily together.

Thirty springs have passed by while life was confined to study and career. I love to play guitar but merely get time to play. I dearly miss someone to be my life partner who can company me to enjoy the tune of music in this busy monotonous life. I live in Narail because of my job.

The advertising of matrimonial sites appeared to me while scrolling Facebook. At first, I used to ignore those. But, finally found the tune of my life through a similar site – biyeta.com. After a few conversations with Bithi, we informed our families. The marriage took place with the consent of both families. Our journey started… Thanks, biyeta.com for creating such a beautiful platform.