It is an immense honour to announce that Nascenia Limited became the semifinalist of Inter Software Company Table Tennis Tournament 2018, powered by Bangladesh Table Tennis Federation.

17 IT companies, 24 teams, 120 players and enthusiastic crowds, all came together under one roof on 31st March 2018 to celebrate amazing communal feeling. 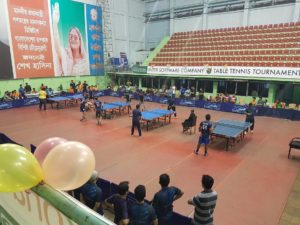 We Nascenia players started preparing for the tournament before one month. We purchased few bats, formed teams and had our practice session at least one hour every day.

Meanwhile, we also participated in the Nascenia programming contest on 30th March 2018. That was an amazing event too. Nascenia organizes this type of event frequently and encourages us to participate in these events enthusiastically.

Thanks to the organizing committee for ensuring the smooth execution of the tournament and kudos to all the participants for a brilliant weekend.