Into the Realm of IoT: The Connected World

We live in a world where we need to be constantly connected with many accounts across many devices. Though most of us use this feature for mainly synchronizing cloud accounts and social media accounts across our mobile devices and computers, so that we don’t need to sign in multiple times; But there are many more uses of this feature. And no other technology can do it better than IoT.

IoT allows us to be connected to various objects and exchange data across network thus making us virtually connected to everything we need on a daily basis. The objects can range from physical devices to vehicles and home appliances, all the way to every other device with electronics, software, sensors, actuators, and connectivity. That means virtually any device with connectivity can be accessed through anywhere and can share data over the network. 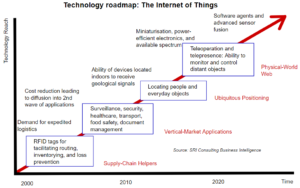 Overview of The Technology Enabling IoT:

IoT evolved due to a convergence of multiple technologies, including wireless communication, real-time analytics, machine learning, commodity sensors, and embedded systems. At first, the network of smart devices was discussed in 1982, using a modified Coke machine at Carnegie Mellon University. It became the first internet connected appliance enabling it to report its inventory and whether the newly loaded drinks were cold.

The concept of Device to Device (D2D) communication envisioned by Bill Joy in 1999 helped the field to gather momentum. Auto-ID Center using Radio-frequency identification (RFID) was another revolution in that regard. It enabled the tagging of things, in which objects with identifiers could be managed and stored by computers. This can be achieved through near-field communications, barcodes, QR codes and digital watermarking as well.

The original idea of Auto-ID Identification has evolved into objects having an IP address or Uniform Resource Identifier (URI). An alternate view focuses on making all things identifiable by existing naming protocols. The objects converse using other agents such as powerful centralized servers acting for their human owners. As devices will use an IP address as a unique identifier, objects in the IoT have to use IPv6 as internet protocol. Different types of networking can be used for the connection such as:

Before the deployment network, IoT modeling and simulation (and emulation) is done. Network simulators like OPNET and TETCOS NetSim are used to simulate IoT networks. Digital Twins can be implemented to produce updates on the status and health of an asset. Also, a number of API simulation frameworks (such as Hoverfly, Wiremock, sMockin, SoapUI etc.) has emerged to simplify IoT development. 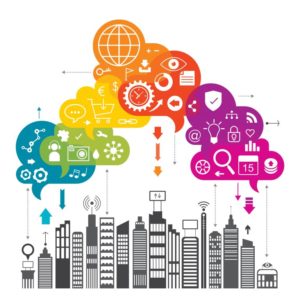 There are various applications of IoT. Most of them can be categorized as a consumer, enterprise (business), and infrastructure applications. IoT can find applications in nearly every fields ranging from natural ecosystems to buildings and factories.

Though there are various concerns regarding IoT such as privacy and security, the emphasis on IoT cannot be neglected. Also developing applications for the variety of IoT devices running on different software and different hardware components is not very easy. But in near future when the use of the internet will be widespread, it holds the key to ease the life of all the inhabitants of mother earth.

So, further research and development are required to make this wonderful technology fail proof, more secure and easy to use throughout all the platforms and devices. Let’s hope that the realm of connected devices becomes a reality soon.