1. First, we need to install windows feature containers with the following command
‘Install-WindowsFeature containers’.
It will complete very quick. After completing it will display a warning to restart pc.

2. Restart the computer with the following command
‘Restart-Computer’

4. Now as we have enabled windows container, we also need Docker. Docker has two parts; Docker engine and Docker client.

Note: Careful with request path and execution as the differences are very small.

7. Add the Docker directory to the system path by the following command.

Note: We need to restart the computer here. Restarting the PowerShell session (as instructed in MSDN) does not work. After restarting the computer you can check if the path is recognized by the following command.

9. Run the following command to check if docker service is added or not.
Service 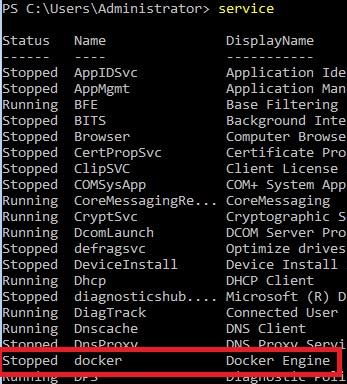 10. Once installation is done start the service by the following command.
‘Start-Service Docker’

11. Windows containers are deployed from templates or images. Before a container can be deployed, a base OS image needs to be downloaded. The following commands will download the Windows Server Core base image.

Note: This will take some time, around one hour. We can see the downloading message in the green banner. Once the green banner disappears PowerShell will wait for you to press enter but will not show any message. Yes, it is confusing. We waited thinking it is working. 😛

14. After the base image has been installed, the Docker service needs to be restarted.
Restart-Service docker

15. Now you can list all installed images by following command
docker images

19. We can see running container by docker ps command
Note: