Nascenia Joins the Largest IT Fair in the World: CeBIT 2014 – Part I

Before going to Hanover, Germany to exhibit in Cebit 2014, I was prepared for two things – Chill and Bigness!

Shaer and Fattah had prior experience of attending there. They along with others suggested not only to wear n number of warm clothes but also to follow some specific orders of wearing those to keep me warm. We live in a country which has an average of 30 degree Celsius temperature throughout the year, so I was preparing to embrace the chillness of European weather.

About Bigness – I tried to get an idea about the size of the fair by searching in google. I got some number like – “5 million square feet”, “1 million visitors” and so on. I said to myself, “Okay, it should be big!”

When I reached in Hanover in Cebit keeping those two in mind, I got immensely surprised.

Firstly, it was sunny with pleasant weather (I knew that the weather will welcome me but could not share it with anyone before

). Secondly, despite my researches on CEBIT, I was blown by the vastness of the fair. It exceeded all my expectations and limits of my imagination. On the first day, I was just roaming around in a Hall (which is about 3 times the size of our China Friendship Conference Centre) to get an idea about it. Later I found that there were about 25 such halls in the fair. It is simply impossible to visit all the halls in 5 days if you want to see those technology companies closely. I tried to grab some photos to make people believe about it- my attempts, however, went in vain; you need to be there to comprehend it!

Nascenia participated as an exhibitor at the world’s largest digital exhibition: CeBIT 2014

Nascenia participated in Cebit for the two consecutive years including this year. 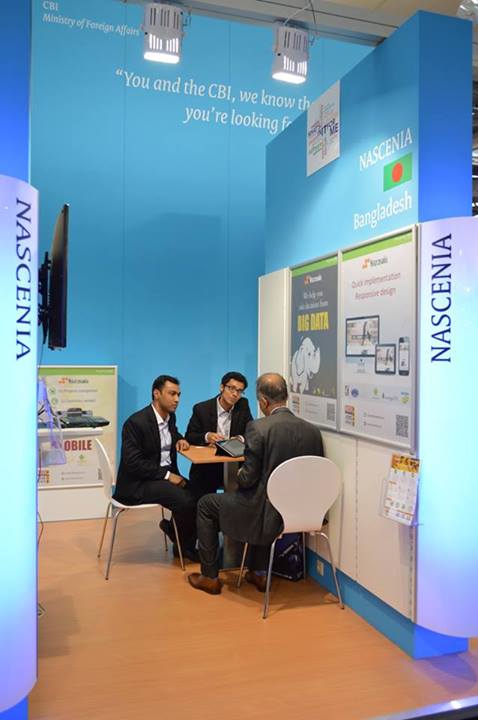 CEBIT 2014: Fuad Omar (COO) and Fattahul Alam (CTO) are having a discussion with a visitor.

I and our CTO, Fattah attended bilateral meetings with over 100 people during the Cebit 2014. The organizers used to say it as the most international events on earth, we got some proof of it there. We met the companies from Germany, Netherlands, Switzerland, UK, Denmark, Sweden, Slovenija, Russia, Kosovo, France, Greece, Italy, Portugal, Poland, Spain, Finland, Andorra, Brazil, Serbia, Korea, Singapore, Barbados, Japan, Jordan, Lebanon, Iran, Saudi Arabia, and UAE. I experienced to talk to people there through translators without understanding a single word which was something new to me.

I found that most of the people were interested to build web applications using PHP, .net and Ruby on Rails. Some talked about mobile applications and few about Big Data, too.

The people we met were either representing an organization or ‘wanna be an entrepreneur’. They were looking to build new things, augment their products or wanted us to maintain their software.

An interesting thing is, most of them do not have any prior experience in outsourcing their works. They showed their concern about the language barrier, cultural differences, time zone gap, and the quality of the work. We assured them by telling our stories and experience of working with European and North American clients for years.

To me, it is all about mental barriers, tons of companies throughout the word has been successfully outsourced their works – it’s a proven model. It is a matter of breaking the ice, overcome the challenges and start with something small to familiarize with the outsourcing process. Companies who are leveraging the talent pools of our company are already ahead of their competitors. They are implementing new ideas and making their products robust in a speedy but cost-effective way. It is a good time to start outsourcing technical works if you haven’t because your competitors are leaping by every moment with the help of us. They will start (or already they are) enjoying this competitive advantage!

[…] stall, I saw a crowd moving fast and that was the most interesting moment which I have mentioned in the previous part. All on a sudden, I realized that, Angela Merkel, the German Chancellor is in front of me; we were […]