Popularity of Programming Languages. Which Language to Learn?

If someone asks which programming language he should learn, it will be difficult to answer. Different languages have different uses and capabilities. So it is up to you to choose the fast and easy one to run your applications.

According to TIOBE programming Community Index for October 2013, C is the most popular language over the years. 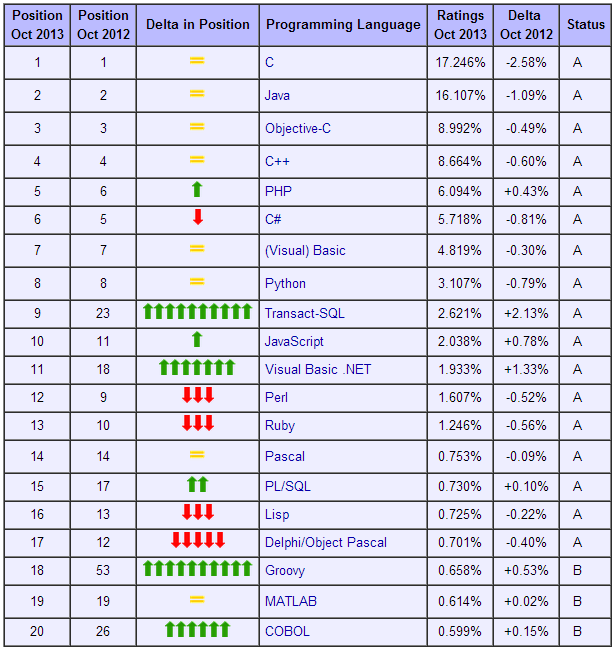 Let’s talk about some programming languages!

C  is a versatile language. It gives a basic knowledge of programming language which a programmer should learn first. I think then other languages will be easy to pick up.

C++ is a challenging and high performance language. It supports almost all the features of C. The first edition was published in 1985 by Bjarne Stroustrup.

You can write operating systems and their subsystems, games, animations with this code but it is a complex & difficult programming language. It is object oriented. It enhances the procedural-oriented C language with the object-oriented extension. The object oriented extension supports design, reuse and maintenance for complex software. C++ has a bigger standard library and the type system in C++ is stronger than C.

Though C++ is a difficult language, it is powerful and secure. It is highly efficient and highly elegant. Once you know C++, all other languages will be easy for you by comparison.

Java is another powerful programming language developed by Sun Microsystems in 1995. It is a programming language which can run anywhere on any hardware platform by a virtual machine. If you write a Java program on Windows, it will convert into universal byte code that is understood by the virtual machine. Java Virtual Machine (JVM) translates the byte code into the format the platform it is running on understands. It means you can run it on other operating system that supports JVM like Windows, UNIX, Solaris, and OS-X etc.

You can write complex programs very quickly by using JAVA. It is secure and reliable. Java got the 2nd place according to TIOBE programming Community Index for October 2013. So, it became much popular. Earlier it was only used for the small devices but now it can be founded in various devices like cell phones, e-commerce apps, PCs and almost all network or computing devices. Java is good for the development of enterprise grade applications.

You may think Java is quite similar with C++ programming Language. Java is faster than C++ and it has distinct style of coding. It supports all Object Oriented Programming (OOP) features including modules, classes, inheritance, Polymorphism etc.

Besides that Java is the most popular language for playing a significant role in the mobile world. It is used for developing mobile games, services and MIDP applications. Mobile Information Devices Profile (MIDP)  uses Java run time environment in cell phones, mobile tracking systems and other traditional PDA devices. Manufacturers and developers are encouraged by seeing the popularity of uses of Java that may lead them to apply this Java technology in a numerous other productive and functional ways including MP3 players, digital TV, video, 3D, simplifying games etc.

PHP is a scripting language used for developing dynamic web applications. It got the 5th position in October, 2013 according to TIOBE programming Community Index.

PHP runs on various platforms like Windows, Linux, Unix, Mac OS X etc. It is compatible with any server. It supports popular databases. Most of the people use PHP to develop small and big e-commerce applications. Many CMS like WordPress, Drupal, Joomla etc. are developed by PHP language. It is fully open source programming platform so that you don’t need to buy any license or copy to install PHP on your machine.

You can get here the tutorial of PHP.

Python is a high level programming language. It is developed by Guido van Rossumin 1991.

It is a multi-paradigm programming language and I think it is easy to code than other languages. Python syntax is a unique mixture of readability and brevity. People do not need to use lengthy indentation here to write a code.

If I compare it with Java, Python syntax is brief and easy to read. There is no need for set/get methods in Python.  It’s neat and simple. It has strong introspection capabilities. It supports a programming style that uses simple functions and variables without engaging in class definitions. Python emphasizes support for common programming methodologies such as data structure design and object-oriented programming. Though Python programs are typically 3-5 times shorter than equivalent Java programs, its running time is slower than Java. Python shines as a glue language.

Ruby is getting popular now-a-days. It was developed by Yukihiro Matsumoto in 1995. Ruby’s syntax is much clear and to the point. One of the great strengths of Ruby is that it has a powerful framework called Ruby on Rails (ROR). Though it released lately in 2004, it has been gaining popularity among developers across the world very fast. The demand of ROR is increasing because of its flexibility.

The TIOBE index, ranks Ruby as #13 among programming languages worldwide!

Ruby is a better choice for them who want to develop their web applications quickly. Most of the popular sites are built on it. For example: Basecamp, Twitter, Groupon, Github, Shopify etc.

We have suggested some books on Ruby on Rails in our previous blog post.

Also wise to check out this stats page:

I am thankful to you for sharing this informative post. I am so crazy to learn about latest programming languages and I am so impressed from this post because it’s too useful for me.

[…] if you are trying to be a great developer, don’t stick with a single programming language. It is better to have knowledge in different languages […]