Remote software development is a growing trend. There can be two types of remote software development. First, the remote team is directly employed by the product owner. The developers just work from remote areas. In this case, the nature of the service does not require a regular physical meeting. Developers meet online, collaborate and focus more on selling the service instead of building a big physical company.

The second type similar is to outsourcing. Developers belong to the third party and they are contractually hired by the product owner. In this article, I have focused on the second type of development. The reason why I have used remote software development instead of outsourcing is that outsourcing is a broader concept. Remote development is more appropriate for software. There is also a common stereotype associated with outsourcing. People assume the outsourcing is hiring the third party to complete process that is outside the core activities of the firm. For example, Dell’s core activity is manufacturing PC. So, to lower cost, Dell once decided to outsource its customer service to India. This is not necessarily true for software development.

Hiring a remote team allows a firm to access a large number of engineers. It allows a firm to quickly have a diverse skill set. For example, Nascenia has 35 Ruby on Rails Engineers. We first talk with clients to see what type of projects they want to build and find out if we can really bring class to that service. After getting a generic idea of their need we see which of our engineers can engage full time for their project or if we need to hire more engineers depending on client’s need. Nascenia has 35 Ruby on Rails engineers. We introduce the engineers to clients through sending out resumes and video interviews as most of our clients are from North America and Europe. The client chooses which developer they want in. We follow a specific software development workflow after that which I have discussed in one of my previous articles.

Hiring remote software developers may allow a reduction in cost. Hiring developers in North America and Europe is more expensive than hiring from Bangladesh. In fact, one of the goals of Nascenia is to reduce clients’ development cost by at least 50%. Price benefit does not mean low quality. In fact, Bangladesh is producing excellent software engineers. They are creating new promising startups. They are performing well internationally in contests like ACM-ICPC and they are getting hired by global software giants like Microsoft and Google (if that’s the standard for quality).

Remote software development also reduces overhead cost such as office rent, utility bills, infrastructure rent and so on. These are cheaper in developing countries. Transferring work in these areas benefits the firm.

The Future Market Lies at the Bottom of the Pyramid

Once I asked one of my professors – “If consumers of the developed country are richer, then why not focus on developing products and services for them as they are more capable to spend money and make a purchase?” 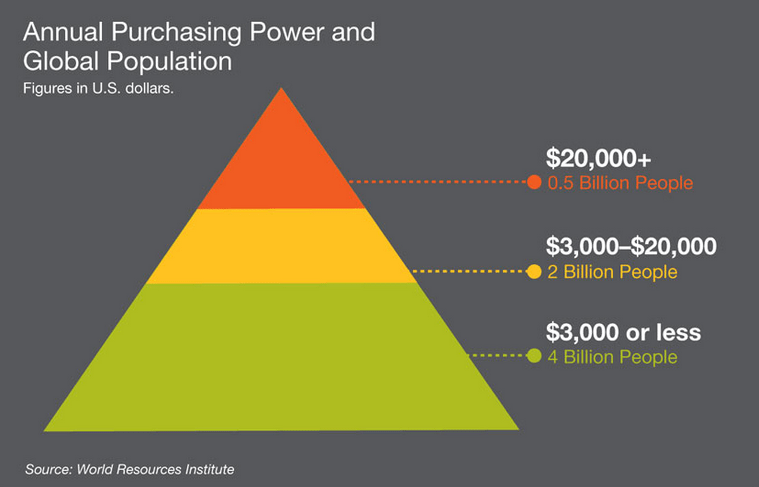 Visual Depiction of Bottom of the Pyramid Concept

World’s population has grown. The proportion remains similar. The reason I am putting this topic here is that this is the future market for technology. Very soon, we will see more and more collaboration between the developers of the two worlds to identify and build an application for the bottom of the pyramid. Local developers can provide insight when developing an application for emerging markets. They have a better understanding of local culture and they have experience in working in local firms that develop a product for the emerging market.

These three are important arguments for remote software development. Before signing off I would like to share a video of Bill Gates talking about how technology will transform the emerging markets in the future.