It was a dark stormy Sunday morning while I was lying in my bed dreaming of “mystical creatures” in a faraway land, an unexpected call at 7:00 am shattered my momentary peace. My early morning admirer was sadly a male (Tauhid bhai) asking me about my whereabouts. In a semi-conscious state from my unfulfilled sleep, I replied “ I am on my way. Will be there in 5 mins”. Yeah, right! That is like the first lie of that day I said while yawning in my bed. Nonetheless, I had to go to the office to pick up the camera as I was the official event photographer of the ruby conference Bangladesh 2017 from my office.

I along with Awlad bhai and Alamin bhai have arrived with a camera and other things like shirts, bags, and badges for the attendees around 8.15 am. The conference was scheduled to start at 9 am and the volunteers were supposed to be there by 8.30 am for their morning briefing and goodies distribution to the registered attendees. However, everything was delayed due to the lovely weather. At one point I was beginning to think most of the registered attendees will not show up sacrificing sleep or the one who will show up will actually be there just before lunch for food and to collect their goodies. Well, I will not lie, this used to be my sole purpose of attending the previous conference during my university life. Nevertheless, as clock hand reached 9.15 am people started showing up. Against all odd, my theory of most people not attending was knocked out of the window. I was surprised to see the enthusiasm among people. It was a houseful program.

The conference was targeted to introduce ruby and ruby on rails, a popular Ruby framework to develop web application among people. There were 10 speakers whom I initially thought were all from the ruby background. I mean why not this is a ruby conference and logically thinking the speaker should be from the ruby background. Yeah, right! I was confidently wrong. Well, most speakers were from the ruby background but there were few who were from other backgrounds. You must be thinking then why is it called ruby conference if you have a speaker talking about functional programming and elixir ( fancy cool name). Well keeping the main focus on ruby they were introduced to tackle the shortcomings of ruby language one of which was speed.

The program was inaugurated by Fattahul Alam (CTO of Nascenia) announcement and his opening speech about code of conduct which was basically about not to harass any speaker regardless of gender, gender identity and expression, age, sexual orientation, disability, physical appearance, body size, race, ethnicity, religion (or lack thereof), or technology choice. 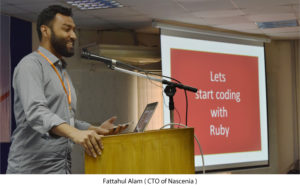 Followed shortly after that a speech was given by Munir Hassan, General Secretary of Bangladesh Mathematics Olympiad Committee and also the initiator of BDSON(Bangladesh Open Source Network). He is a very fun loving guy which was reflected in his speech. He opened his speech saying he came here with a heart full of enthusiasm expecting to find a lot of women to talk to. I was baffled and as well as amused. He just spoke most of our minds. He talked about encouraging more female in tech industries because apparently having a girl in a development team increases team productivity. I completely agree with him as I personally experienced it during university life. When you have a girl in your project team everyone tends to prove to the girl who is the best coder and becomes a team player whereas when you belong to all boys team the scenario is quite different. 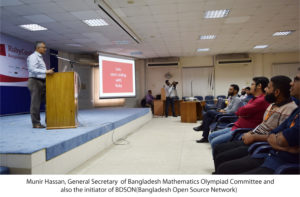 Our very first technical speech was presented by Muntasim Ahmed on how to start coding using ruby. The presentation was very informative for freshers and people who have no idea where to start. It was also a revision for those of us who forgot some basics of ruby. Overall it was very organized and provided clear guidelines for a future ruby developer.

My brain was slowly switching to sleep mode due to the influx of so much information. As I drowned myself in romantic revere in this romantic weather then came an announcement. It was finally time for a tea break. While I sip into Nescafe coffee observing my surrounding I felt I was among super intelligent beings whose only purpose in life was turning caffeine into code. There were expert Rubyist and developer who were discussing code and new technology and what they are working on. As I eavesdrop their conversation I learned a lot of new things about various technology and was able to identify my shortcomings.

After the tea break, the next presenter was Sajid Rabbani who discussed speeding up API and tools to measure speed, followed by Ashrafuzzaman bhai speech which consisted of crafting beautiful code using ruby DSL. Irfan bhai talked about building microservices with rails and Tauhid bhai discussed buggy rails code.

Personally, I liked the presentation given by Mafinar bhai and Tawsif bhai as they talked about functional programming and elixir. Their presentation was very interactive and the way they deliver it was filled with humor. Tawsif bhai talked about some ruby’s limitations and how elixir can be used to overcome those shortcomings.

Lastly, Mizanur bhai presented on which language to choose. From his speech I understood that to be a programmer it does not matter which language you use as long as you can think and solve problems. A programming language is a mere tool. There is a saying a good craftsman knows his tool well and he is aware which tool to use based on a situation. Like that a good programmer knows well that instead of letting language defines his or her potential it should be used to help programmer reach his or her potential based on the problems and situation they are facing.
Before the closing ceremony lightening session was held where Shaer Hassan ( CEO of Nascenia), Fuad Omar ( COO of Nascenia) and Fattahul Alam ( CTO of Nascenia ) presented a small talk on various topics.

Overall the ruby conference was a blast. I don’t know about others but the conference provided a way to measure my skills. That day I realized I have a long way to go and learning is an endless process. Apart from good food, unlimited coffee and swag it was very informative and well organized. Thanks to Nascenia and BdREN for being golden sponsors and managing it so well. The passion for programming and devotion from people of the different community as well as Rubyist will truly help us build a bigger community to enhance our skills and take us to the next level. I think It is through a community a person can grow and help others to overcome their limitations. So let’s build a Ruby community for all the ruby enthusiastic out there and provide a platform to showcase their skills and create an opportunity for sharing and self-improvement.